Comfy for Chemo wishes you a Happy New Year!

On behalf of the Comfy for Chemo Foundation and our family, I would like to wish you all a Happy New Year.  We are so very grateful for all of the support we have received in 2010 from friends, family and people that believe in our efforts.  Through all of your charitable contributions we have been able to donate a year’s worth of blankets to Womack Army Medical Center in Fayetteville, NC, blankets to St. Joseph’s hospital in Atlanta, GA, children’s pillows to Candlelighter’s Camp CLIFF in Houston, TX and individual blankets to patients in AL, IA, IL, GA, LA, PA, SC, TN and TX.

My sister, Kim, would be so honored by the generosity displayed by so many this past year as you have all helped make her initial vision a reality.  We hope that you will continue to support our cause in 2011 and bring a sense of warmth and comfort to those undergoing chemotherapy with the gift of a blanket.

To learn more on how you can help us or to request a blanket for a friend or loved-one undergoing chemotherapy, please contact us at comfyforchemo@suddenlink.net.

Make a difference... one blanket at a time... one life at a time.

January 1st, 2011, will mark the one year anniversary of the Kimberly A. Hansen Comfy for Chemo Foundation.  The start of this incredible journey was sparked by my daughter Kim’s last wish; to help other chemotherapy patients by giving them a comfy blanket, like hers, to have while undergoing treatment.  It was a rather simple request, one that has proven to be more than just a blanket for all those who have been a recipient.  We have received countless comments from loved ones and friends on how the simple gift of a blanket has been a source of comfort and support.  The blanket has helped lift the spirits of those undergoing chemotherapy treatments, and has become a cherished companion during the remainder of their therapy, hospital visits, and days of recovery at home.

The first project that Comfy for Chemo undertook was to support the oncology department at Womack Army Medical Center, where Kim spent so many hours, with her blanket, undergoing chemotherapy treatments.  Comfy for Chemo has delivered over 200 blankets to the oncology department at Womack Army Medical Center, enough blankets to give to all the chemotherapy patients who have received treatment at Womack in 2010.  “So many of our patients have loved receiving the lovely, warm, comfy blankets [given to them at the beginning of their chemotherapy treatment],” says Dr. Penelope Harris, the Chief of Oncology at Womack Army Medical Center.  Additionally, Dr. Harris states, “It's also good to see that when patients have to be admitted to the hospital during chemo, or even afterwards, most will bring their blanket with them, an obvious sign of comfort and familiarity.”

As President of the Comfy for Chemo organization, I am so very proud of our first year achievements at Womack, and I’m especially thankful for all of the support we have received from friends, family, co-workers, and the military community in the Fayetteville area.  It is estimated that the oncology department at Womack will provide care to 400 chemotherapy patients in 2011.  We are kicking off our 2011 fundraising campaign specifically aimed at raising funds to purchase blankets for these patients.

You can make a significant difference…one blanket at a time…one life at a time.  This holiday season I am asking you to help us by donating to this most worthy cause, helping provide comfort and support, and in some small way improving the lives of Womack’s chemotherapy patients as they are in the fight for their lives against cancer.  Please open your hearts and donate to Womack Army Medical Center.  The cost of one blanket delivered to one patient at Womack is $27.  To make a donation please use the Paypal button to the left or send a check payable to Comfy for Chemo at 13314 Queensbury Ln., Houston, TX  77079.

I thank you all in advance for your support, and God bless you for helping others in their time of need.
Dave Nypaver
President, Kimberly A. Hansen Comfy for Chemo Foundation

A letter to all from Lt. Col. Bill Hansen:

Dear Friends,
It was over 28 months ago that my beautiful wife Kimberly was first diagnosed with Stage 4 Cancer.  When we first heard this news from the doctor, none of us truly understood the impact of what we were hearing- we had no idea that just 18 short months later, Kimberly would be taken from us.    Through all of the pain and suffering, there was one thing that made Kimberly feel just a little better- a blanket her sister had sent her when she first started treatments.  This blanket became much more than something to keep her warm.  It became a symbol of comfort and security.  It was the one thing that brought Kimberly some semblance of peace as she was fighting for her life.  Every time I took her to the doctor, she had the blanket close at her side.  It meant so much to her that one afternoon during a trip to the Emergency Room, she had me turn the car around because she realized she had left the blanket at home in her rush to get out the door.

In the midst of her own suffering, Kimberly decided that she needed to do something to help others.  Kimberly came up with the vision for Comfy for Chemo.  Kimberly wanted all chemotherapy patients, particularly those at Womack Army Medical Center, to feel the same comfort and security that she felt with her own blanket.  When making arrangements for her final days, she asked that instead of sending flowers, people consider donating a blanket for other cancer patients in the Womack Oncology Department.  Even in the end, Kimberly was still thinking of others.  Less than 48 hours after her passing, donations began pouring in and we had enough blanket donations to give one to every cancer patient undergoing chemotherapy treatments at Womack Army Medical Center.  It was through the kind generosity of people like you that Comfy for Chemo was born.

December 31st will mark the one- year anniversary of the death of my wife.  Kimberly was an amazing woman with a heart full of compassion that knew no bounds.  She was always there to help others, and even in her death she was still focused on making a difference in the lives of others.  The donations did make a difference.  I have been contacted by several people that we have donated blankets to.  I have listened to countless stories of how much the blanket means to them.  It is something they can hold onto…something that is theirs.

This is the time of year for reflection, a time of good will, and the spirit of giving.  During this holiday season, I ask that you consider donating to Comfy for Chemo.  All donations during this holiday season will be going to support the Womack Army Medical Center’s Oncology Department in honor of Kimberly.  The military members and their families have put their lives on the line for the rest of us.  Now they are fighting for their own lives.  The gift that you will be giving is much more than a simple blanket.  I have witnessed this first hand.  It is the gift of hope and comfort for those that are in the fight of their lives.  I want to say thank you in advance and happy holidays.

Here is one story of how a blanket has touched someone’s life:

“On April 16, 2010, I was diagnosed with small cell lung cancer. My daughter, Karen, went to school with Kimberly and had gotten very involved in her story, as had I.  As soon as Karen’s friend, Bill Hansen, heard of my diagnosis and planned treatment, he immediately sent me a blanket.  I started chemo a few days later and had my blanket by my 2nd round of chemo. I was astounded when I received it.  It was the softest blanket I had ever felt...and it was beautiful! I never had chemo again without that blanket...it was such a comfort to me.   It represents more than I can put into word.

One day near the end of my months of chemo, the chemo IV started leaking and I didn't realize it until it was on my clothes and the blanket. The chemo team told me that it was toxic and confiscated my clothes and my blanket. I was devastated. Not about my clothes, but about my blanket! The next day when I arrived for chemo, they told me they had talked to some "experts" and that my blanket would be okay after a few good washings. I was ecstatic!!!  I got my blanket back!!!! I could finish out my chemo rounds with my beloved pink blanket!!!! It meant so very much to me.

We were told the tumor would never go away, but would hopefully get much smaller and would either be "active" or "inactive".  A few weeks ago, we met with my Oncologist regarding my last CT Scan. He said the tumor is gone!!!! What a miracle! We have so much to be grateful for.” 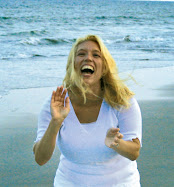